Many years ago, when Scottish breed of cats was just beginning its development in Russia, the palette of colors was quite small. But now, thanks to the productive work of foreign and domestic breeders, this breed can compete with other breeds for diversity and richness of colors. Today we will talk about the color, which has gained immense popularity - Scottish silver chinchilla.

The first thing that catches your eye is the similarity of this name of cats color with the name of the eponymous South African rodent. You might think that these two animals have the same color, but, in fact, the coloring of Scottish silver chinchilla cats is directly opposite the coloring of real chinchillas. Why this name was chosen is unknown. But rodents do not have anything to do with this 🙂

If we are talking about the emergence of chinchilla color of Scottish cats, now almost all modern Scottish chinchillas are descendants of Persian and Exotic cats. These two breeds were used by breeders to bring this luxurious and distinctive silver color and emerald eyes to the British and Scottish breeds. This work required a lot of effort and time, but, as we see, it has borne fruit. And now we have the opportunity to admire the cats of incredible beauty! By the way, an interesting fact - it is believed that the color of the chinchilla is the first deliberately created and fixed by the breeder color.

In practice, all these colors are very similar in appearance, so we will consider them in one article.

The fur of cats of chinchilla color always looks rich and festively elegant. Perhaps, this color can be compared with a artic fox fur coat: crystal white with a black coating. At the same time, the pads of the paws, as well as the strokes of the nose and eyes, are charcoal black, which gives a certain charm and completeness to the image.

As I said earlier, Scottish cats have a large number of colors because of their origin. At the beginning of development of the breed, these cats were mostly represented by solid colors, such as: blue, lilac, blue-cream, etc. But to date, it has been possible to get the rarest and once unimaginable colors of Scottish cats by adding new blood of imported cats. In general, according to the standards of international felinological associations, Scottish Fold and Scottish Straight cats can have a fur coat of any one-color and patterned (tabby) color and their combinations with silver/gold/white. Agree with me, what a huge variety - for every taste! Not every breed can boast of this!

So why for many people a Scottish kitten of silver chinchilla color is so desirable? 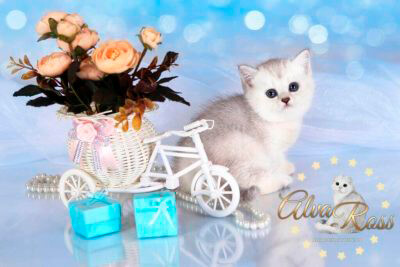 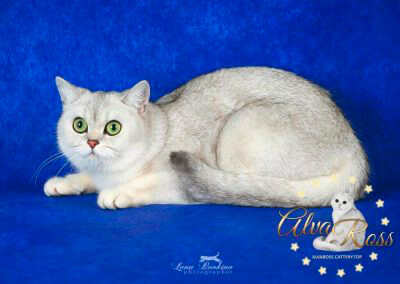 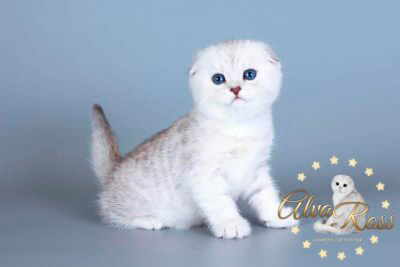 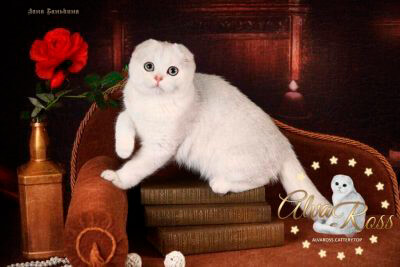 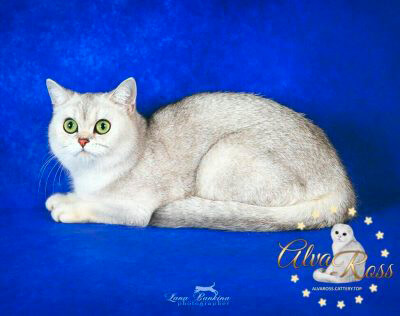 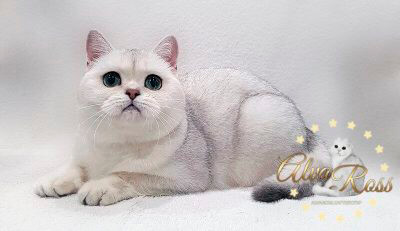 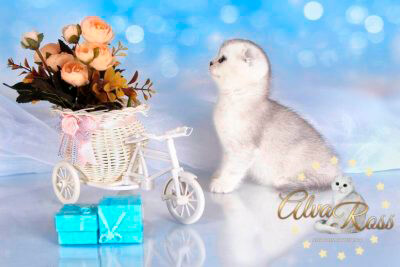 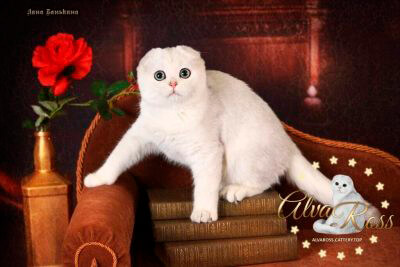 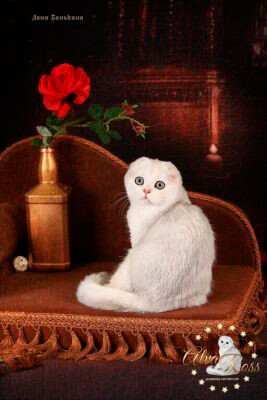 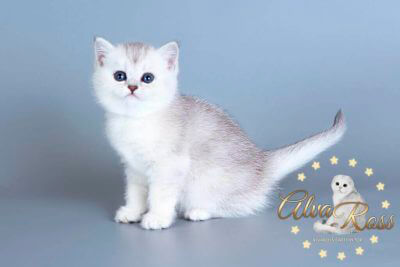 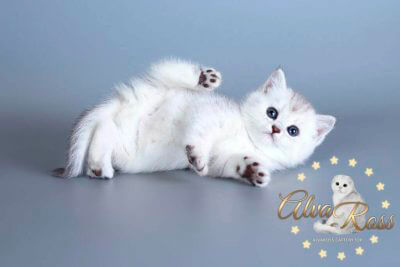 If you look closely at photos of Scottish silver chinchillas, and also learn the opinion of professional breeders who work directly on this color, you can see that this color has the following differences from other cat colors:

I would also like to tell you about the Scottish Fold cats of this color.

Scottish Fold owners of such chic color as "silver chinchilla" look very unusual, I would even say "extremely unusual"! Have you seen Scottish Fold Silver Chinchilla cat Photo before?

Then I will try to describe it to you:
These cats have a strong physique, they have a light or white undercoat. They also have a specific coloring on the back, sides, head, tail. It resembles hatching and gives the wool a silver hue, as if it were not a cat, but an ingot of silver! Huge, round, expressive and brilliant, with a soft gaze of emerald eyes combined with such color - a true jewel! And also small ears!

The overall appearance is original and charming at the same time. It evokes tenderness and an irresistible desire "I need this kitten!".

Scottish Fold Silver Chinchilla photo of these magnificent animals you can see on our website and make sure of the truth of all that I wrote above.

I'm sure that after viewing the photos, you finally decide on which kitten you want 🙂

As you can already understand from this article, work with this color is very difficult, so catteries of Scottish Fold silver chinchila cats are rarity for today.

Only a true enthusiast who is literally in love with the enchanting beauty of green-eyed Scottish Fold and Scottish Straight silvery chinchillas, is working on the development of this luxurious color. In addition to the forces and time, significant financial investments are also required. The purchase of quality breeding cats, which allow to improve the type from generation to generation, the cost of the show career of animals, as well as their keeping and veterinary services - without all this, breeding work with cats is simply impossible.

But, as you know, a person who puts his whole soul into a favorite business will certainly succeed! And, thanks to such enthusiasts, the number of quality Scottish Fold silver chinchillas will increase significantly! We will have the opportunity to contemplate their beauty at the top exhibitions around the world! The group of these colors is unofficially called precious and it's not just that!

More information about catteries of Scottish Fold cats that are engaged in the coloring of silver chinchilla cats can be found on this page:
http://alvaross.com/en/catteries-of-scottish-fold-silver-chinchilla-cats

I also want to tell you about the Scottish silver chinchilla points. In 2017, I bought a Scottish Fold cat named Turmaline. His big round sapphire eyes have stolen my heart! This color has appeared recently in the Scottish breed, but it is already very popular. Cats of this color look very elegant! They look like silver chinchillas, but their eyes are not green, but blue. In addition, their body has a pure white color, and the points on the face, ears, tail and paws have a silvery shine. This is possible thanks to the color-point gene. I wrote more about this color in the article:
http://alvaross.com/en/scottish-silver-chinchilla/silver-chinchilla-point 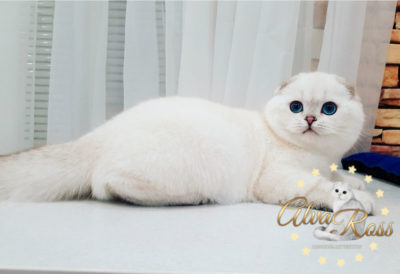 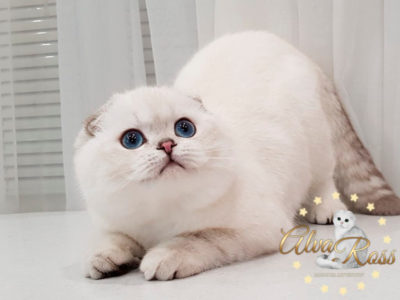 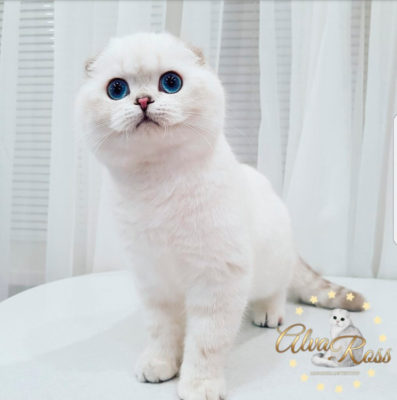 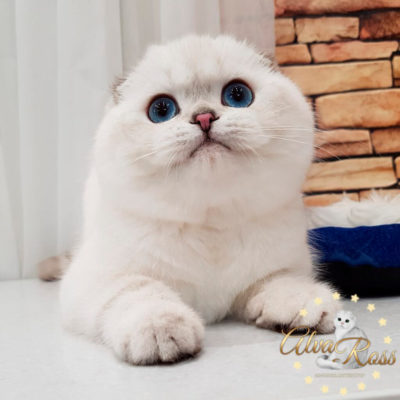